July 12th....found us on the road headed to Wisconsin.   Probably not the best time to complete my monthly challenge:     I figured between it not being the brightest idea to announce to the internet world "Hey, we aren't home" and well, how interesting is it to show the dry plains of Colorado or the corn fields of Nebraska...I have decided to modify this month's challenge.

Instead, I give you....12 (actually 13...had to have the final shot included)...memorable moments from our summer road trip adventure. 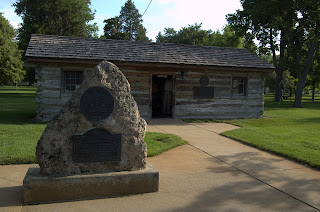 Long before there was "You've got mail"...there was the Pony Express.  Running for just 18 months (starting in 1860), it was a mail delivery service using horses and a series of stops or stations that ran from St. Joseph's Missouri, across the western Plains to Sacramento, CA  This particular station was donated to the city of Gothenburg Nebraska and is now a small but well maintained museum.   Can you believe it took 10 days to get a message delivered and this was considered a vast improvement to other options available at the time.  Yes, we have become spoiled with texting, email and other ways of receiving the news immediately. . 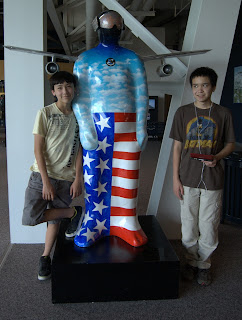 Further on down the road, was our next 'torture the kids with education" stop.  This was at the SAC museum.  Yes, you can imagine the giggles and snickers when I told the teenagers in the car we were stopping here for a stretch break.  It stands for Strategic Air Command and is located just outside of Omaha.    The focus of this museum is bombs and the aircraft designed to transport such bombs. 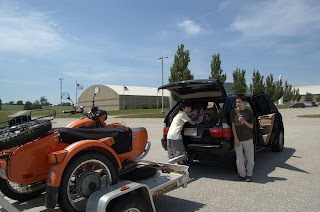 History Lesson over, time for a snack break.   Oh would you look who is tagging along for the ride, Dom's URAL Valencia.  With temps reaching the triple digits, I know that trailering the motorcycle was the perfect solution for getting us all to Wisconsin.  Thanks to Dom's friends for loaning us their trailer.  I definitely see such a purchase in our future. 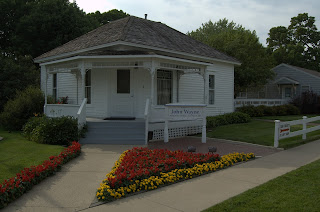 As we continued to plug away towards our destination, we decided to take another slight detour, to see where John Wayne was born.  Just 14 miles off our planned route, we found ourselves in Winterset, IA after the museum had closed.   Oh well, maybe next time. 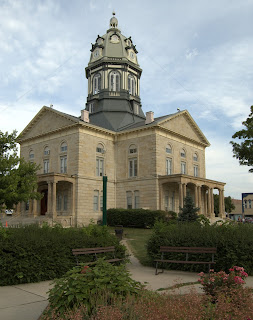 Hey, would ya look at that?   John Wayne was born in Madison County, IA....yep, as in The Bridges of Madison County.  I had suggested to Dom and the boys that we visit said bridges but they all seemed cold to this idea.   Imagine my genuine surprise when we realized that the bridges were in the same place we were.  HONEST, I didn't plan or plot for this to happen....but they weren't buying this, convinced I had hatched a plan all along to make sure I got my romance fix in Madison County. 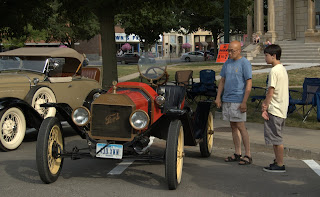 We did park the car and stretch our legs for a bit....even with all the shops closed, the local car club was having a small show or gathering.   We searched around for a car from 1933 to show Grandpa (the reason for our trip this week is to celebrate my dad's 80th birthday) but this was the closest we found. 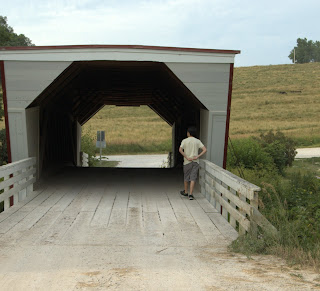 Um?  Ok, this is one of the bridges in Madison County?  Yep, even I have to admit it was a bit of a disappointment.  I would later read on line that the bridge we stumbled across, Cedar Bridge was the bridge where the character Francesca would go and help the photographer Robert Kincaid take the photographs.  This was also the bridge featured in the book's cover.    Hmmm...that doesn't look right.   I continued to learn that the original bridge (which was even where Oprah Winfrey filmed an episode of her show back in 1993) was destroyed by arsonists in 2002, and what we visited was a re-build of the original bridge.  Ok, well, that makes sense...it all seemed rather new.

We would finish up Day 2 of our drive near Ames Iowa.   We tried to find lodging closer to Des Moines but there was no room at the Inn...3 inns actually so we just kept heading north...Lucky for us we found a Super 8...price was right, even if the lobby had the distinct odor of curry.... 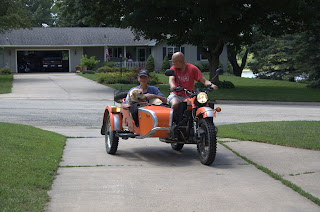 Sunday, we headed to Waverly Iowa to visit with my dear friend Karen and her family.   I knew that her younger dog, Emma loved car rides so we were all curious to see how she did in a side car.  Word is she enjoyed the ride immensely.

What do you think, Boyd?  URALs make for a great hobby! 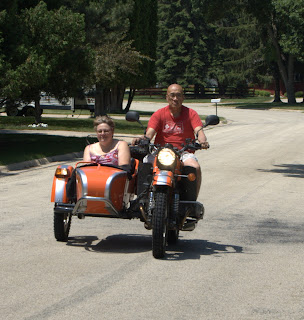 Karen also decided to go for a spin.... 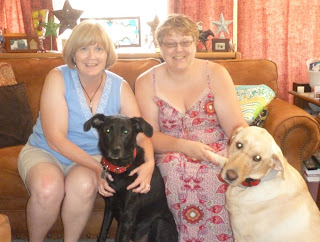 Karen and I met some 5+ years ago, through an online community.  It was a wonderful treat to finally visit her in her own home, and spend some time catching up in real time! 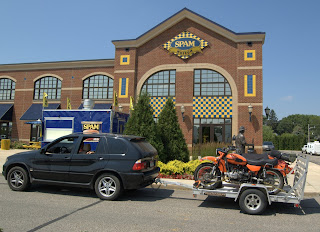 Taking my SPAM fan hubby to Mecca....if you ever pass through Austin, MN, I highly recommend this visitors center and museum...it is nicely done... 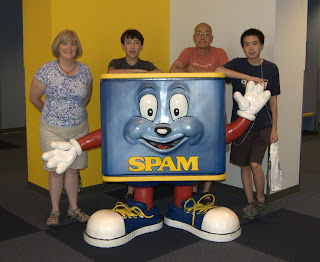 One big happy family....
We made one more stop, in Preston MN to visit my friend Amy and her family....for some reason, no cameras were pulled out...which shows how us scrapbookers are indeed slowing down when neither Amy nor myself reached for a camera...instead dedicating our few hours together to catching up. 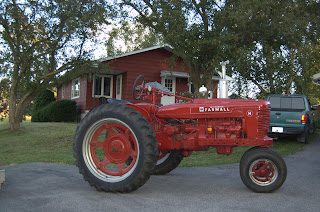 And finally...some 900+ miles later, some 3 days later...GPS informs us that we have reached our destination...stay tuned for more stories and pictures from our trip back home.
Posted by Martha at 1:42 PM 2 comments:

Too Fast Too Soon

On Friday, this little one? 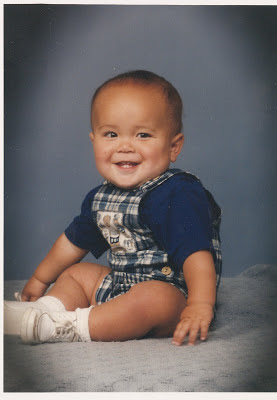 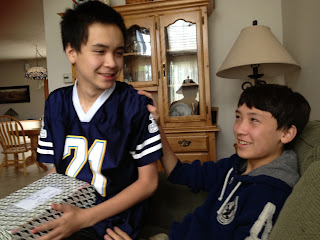 Sweet 16?   Not really, as let's just say personal hygiene is not high on his priorities.

Mid morning, my dad called.   I assumed to wish his grandson a happy birthday.   Unfortunately, that was not the only reason he had called.     There had been a death in the family.   My Aunt Sue, recently diagnosed with liver cancer, had lost her brief but brutal battle earlier that morning.

Yesterday, I found myself trying to compose a note of sympathy for my Cousin A.
All that came to my mind was the idea of "too fast, too soon"

My first born is growing up too fast.   It is too soon for him to be old enough to drive and date (lucky for us, he has zero interest in either of these traditional 16 year old milestone moments).

My aunt, just shy of her 64th birthday, passed away too fast, too soon, and without a doubt too young.

When my aunt joined our family,  she brought with her two young girls.  Yes!   New cousins for us!   These two sweet girls would end up becoming two of my favorites.   Cousin Cindy  and I shared a birthday which of course bonded us in a way that the 5 year age gap really didn't seem to matter.   My cousin A. while closer in age to me, well, neither of us wouldn't really realize until we were adults how much we have in common and how much we enjoy each's others company.

So first, let me say:  Thank you Aunt Sue for falling in love with Uncle Boo and giving us bonus cousins. 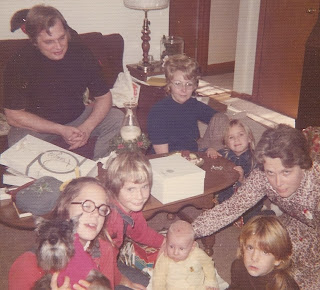 My sister and I and our newest cousins
When Aunt Sue joined our extended family, it was during a time when divorce was not as common as it is today.   And the sister-in-laws (my mom and aunt) were shall we say "not ahead of their time" in terms of accepting such a woman with a past.   It is safe to say these women were guarded in their reception of this new member to the family:  Older sisters hesitant to accept change, protective of their baby brother, and genetically wired to remain guarded for a very long time if the situation called for it.

There was no doubt that Aunt Sue had her work cut out for her! 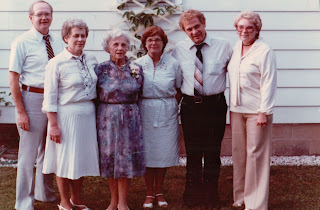 But that didn't stop her....nope.  Aunt Sue did not give in or give up....and she managed to win us all over with not only her quick wit, her great sense of humor and her charming smile....but mostly in her undying devotion to loving Uncle Boo! 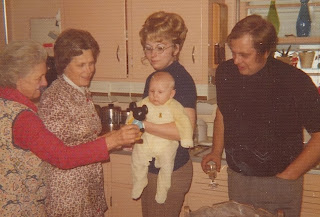 For in the end, the family got exactly what we needed....someone who would love Uncle Boo as much as we love him!

Aunt Sue, you will  be forever remembered....and we will miss you deeply.
Uncle Boo and Cousin A....we hope brighter days are in your future.... 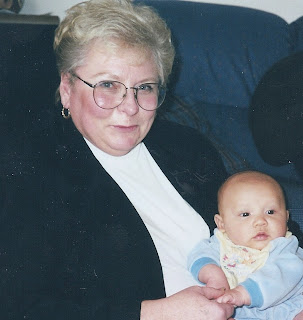 Aunt Sue snuggling with Thing 2 circa 1999