The reason for my absence...

Not only was it a good week, it turned out to be a good week to be out of town.

Our prayers go out to the victims and their families of the Aurora shooting.  This story hit just a little too close to home:  with a few of the students from my school being involved.  From what I've heard, all are expected to make a full recovery....with time and support.  They can certainly count on support from the nurses office once we all return to school next month.
Posted by Martha at 7:02 PM 1 comment:

It is a never ending battle to get Thing One to try new things.  But, in all honesty, I shouldn't get too frustrated with him:  I am also a creature of habit.  I know what I like and don't really stray too far from those standards.

Take reading, I am a 100% fiction reader.  Yeah, yeah, yeah, I am sure that non-fiction book is very well written and worth my time to read, but I had convinced myself I just couldn't get through. 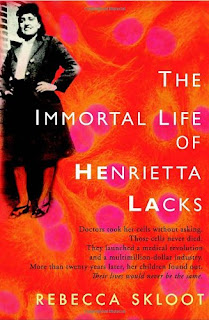 And then came the current hit The Immortal Life of Henrietta Lacks.  It  really sounded fascinating:  telling the story of the HeLa cells.  Malignant cells collected in the 1950s that really shaped the course of modern medicine in ways the scientists never imagined.  It also tells the story of who HeLa was:  Henrietta Lacks, a poor black woman who grew up in rural Virginia and later moved to Baltimore.

Sounded great...but it was NON FICTION.
Remember, I don't do that genre of books.

But, just as I nagged at my older son to try a new food, I too pushed myself to try a type of book that is typically not to my liking.

And guess what?  I liked it.  I really, really liked it.

I could relate so well to many parts of the story.  My background as a nurse of course factored into it. But, I was also taken back to 1992, when my first job out of the Army was working at an inner city hospital in Baltimore Maryland.  Who knows, maybe Henrietta's descendants passed through my clinic?  Doubtful, but possible.  I did my reserve training with an inner-city unit not far from the area that Henrietta's family still lived in.  And the area that she grew up in?  Not far from a job I "almost" took but decided rural Virginia was not the place for me.

I found myself reflecting on how much medicine has changed over 50 years.  Not just how we treat illnesses, but how we treat the patient.   Henrietta was treated in a fashion consistent with the time and era.  But, if we treated her and her family in such a fashion today?  Yeah, get ready to meet with the legal department and expect to lose your license.

Am I ready to convert to reading more non-fiction?  Probably not...but this one really was a worthy read. 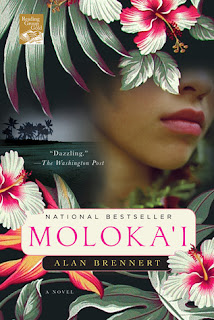 Hey, did I tell you?  Last month, I went to Hawaii.  OK, not really....but I did read this interesting historical fiction set on the island of Molokai.  It tells the story of 7 year old Rachel who developed leprosy.  At the time, we knew nothing about this illness and fear guided many of decisions related to how it was managed.  As a result, isolation was the name of the game.  Rachel was shipped off to this isolated island.  The story tells her life on the island, along with many others.

I found the history part of the story to be fascinating.  Rich in detail:  not just about leprosy but about the state of Hawaii before it became a state, the cultural and religious practices of its' people.  Stuff I never knew.     I would say that was the author's primary interest:  sharing history as I sometimes felt the character development was slapped together and plot was stretched so that he could include another plausible historical event.

Regardless, it made for an interesting read and again, would make for a very interesting book club discussion.

It also left me wanting to pack my bags and head off to Hawaii...which I suppose makes this a potentially expensive book to read.

So those have been my two favorites of the summer.  I've also found myself afflicted by this disease caused Netflix-itisis...you know you can watch entire seasons of certain shows?  Yeah, not so good....I've found myself hooked on Drop Dead Diva and the darker lawyer show Guardian.  Both have become huge time drains...but with the recent heat wave, one doesn't feel like doing much more than hibernating inside, away from the hot dry summer sun.